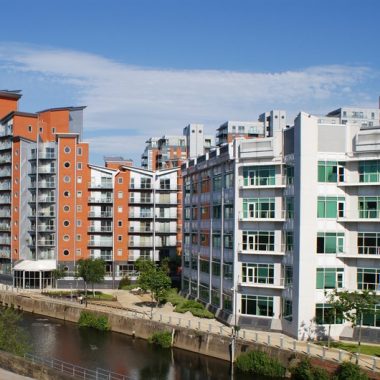 Now firmly embedded into most high-profile property development-related events, one of the many panel discussions at this year’s MIPIM[1] explored the current direction of the institutional Private Rented Sector (iPRS). Chaired by Damian Wilde[2], panellists Richard Snook[3], Bill Hughes[4] and Jacqui Daly[5] collectively delved into a number of topics related to build to rent’s sustained growth, how the sector fits into the wider picture of housing provision, some of the imminent macro-related risks and how modular housing has the potential to accelerate future delivery[6].

The Role of Private Rented Sector in the Coming Decade

Richard Snook provided some background as to how “generation rent” has developed to its current form – largely extracted from the 2016 PwC housing market outlook report.

As seen in the chart below, the noticeable increase in mortgaged property ownership during the Thatcher years contrasted with a sharp decline in social rented housing provision and a flat private rented sector.  The social rented sector continued to decline during the 1990s and 2000s, as did the mortgaged owner occupier sector (more sharply from 2003 to 2015).  Conversely, during the 2000s the private rented sector began its unprecedented growth – principally due to the introduction of buy-to-let mortgage and the largely speculative finance mechanisms that characterised the marketplace prior to the credit crunch.  Although the growth of the private rented sector is expected to subdue somewhat in the coming years, it will remain a dominant tenure – especially as the rate of mortgaged property ownership is projected to slow down.  See our post on the changing face of buy-to-let property investing for more on this topic. 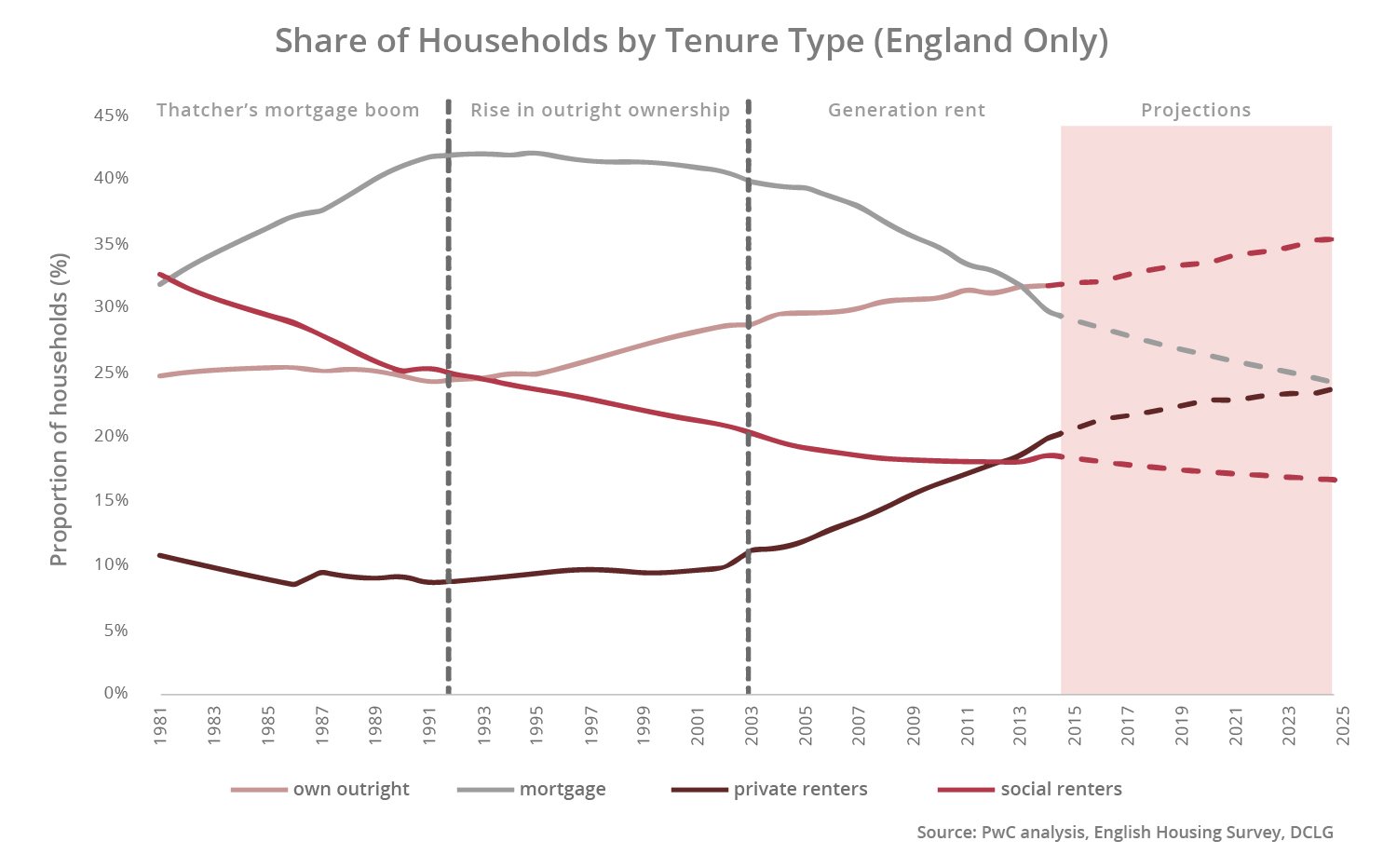 The PwC data also pointed out that private rental amongst 25 to 34-year olds is rising from 20% in 2003-04 to a projected 66% in 2024-25.  Despite Help to Buy’s efforts to encourage homeownership, rising property prices and higher deposit requirements mean that saving to get on the housing ladder is tougher than ever before.  This has been exacerbated by the low savings rates at banks and building societies and concerns that Help to Buy may place certain homeowners in financial difficulty in years to come.  The result is that more young people are expected to become life-long renters or become home owners later in life, when they inherit property or wealth.  The chart above shows how outright owned property largely owned by long-term homeowners is expected to grow steadily. Many of these homes, it is believed, will eventually pass down to future generations.

Where Next for Build to Rent?

The development of purpose-built buildings specifically for the private rented sector gained initial traction in 2011.  Today, there is a pipeline of some 100,000 units and the sector is evidently demonstrating clearer signs of its ability to scale in line with core demand trends.   With £1 billion specifically earmarked for investment into the sector[7], Legal & General’s Bill Hughes highlighted how, despite several wider macro risks, the appetite amongst investors remains robust – particularly amongst those in search of portfolio diversification. The attraction is also attributable to the liability-matching characteristics of the asset class as well as its ability to produce inflation-linked returns.

L&G and other institutions are primarily interested in focusing on the London and core city markets – where they currently feel most comfortable. However, Hughes also referred to second tier cities such as Bath where increasingly stronger business cases are emerging. Learning, although not replicating, the “multi-family” model adopted in the US[8] was deemed a step in the right direction.  PRS units for retirees was also mentioned as having interesting future growth dynamics.

The inflated nature of the land prices, overly-competitive bidding with build to sell developers, planning risks and cost-related constraints are commonly cited barriers to entry. These factors would explain the tendency of BTR developers to focus on the higher end of the rental market, where margins are more secure.  Jacqui Daly highlighted that these elevated premiums are also reflected in the extra facilities such as amenities, front-end customer services and security (not necessarily in profit margins).

Nonetheless, the question of affordability cannot be ignored – Bill Hughes underlined that developers must work harder to provide good standards of rental accommodation for key workers and other income groups largely ostracised by the market. Richard Snook concurred, highlighting how in London PwC research has shown that over 50 percent of take-home pay is consumed in rent.  These risks are exacerbated by falling real wages, rising inflation and little likelihood of rent cuts due to the well-known supply-side issues.

Focusing exclusively on the millennial rental segment may, therefore, not be sustainable.  SIGMA group’s work was quoted as an example of widening supply to a broader range of income groups.  In this regard, the question of whether the Registered Social Landlords and Housing Associations could be bought into the picture as build to rent developers was also raised.  Such diversification in tenure forums would, however, require a huge spectrum of organisations and institutions to work collaboratively.

Another potential risk highlighted by a member of the audience was the possibility of rental controls[9].  With such plans already rejected by housing charities such as Shelter, the panel agreed that the inevitable result would be a decline in standards and a slowdown in the delivery of new stock as investors become deterred.   Bill Hughes, however, underlined how the private rented sector needs to respond constructively and appreciate the wider picture.  The industry is indeed prone to exploitative practices and, as mentioned above, the fact that much of the sector focuses on high end products certainly does not help matters.  A balance needs to be achieved where rental increases are sustainably controlled to a level that does not become unpalatable to property investors.

Is Modular Housing the Key Driver of Build-to-Let Delivery?

Although the delivery and absorption of build to rent units are generally faster relative to build to sell, there remains only a handful of developers that have the necessary expertise to execute projects at the scale necessary.  In light of this issue, and also taking into consideration the major skills shortages, modular and pre-fabricated construction could work complementarily with more traditional methodologies.

L&G’s investment into a 51,000m2 factory in Selby confirmed that its commitment to is a serious one.  A video of the initial prototype (from July 2017) can be viewed below:

Interestingly, these units continue to debunk many of the common preconceptions from the building industry in particular – offering decent quality housing at a lower cost pound for pound.  In line with L&G’s intention to double its build to rent delivery targets by 2019, Bill Hughes highlighted how such models will certainly have a key role to play.

What Does This Mean for Buy-to-Let Landlords?

One of the theories attributed to July 2015’s introduction of Section 24 of the Finance Act was an apparent top-down favouritism towards the build to rent sector over the interests of private landlords.  The Build to Rent fund and other government initiatives in recent years have perhaps reinforced such reasoning.  Regardless of your stance on this question, it is worth referring back our interview with Ian Fletcher, policy director and lobbyist at the British Property Federation (BPF), shortly after the release of the Housing White Paper.  Although build to rent clearly looks set to gain traction in the coming years, Fletcher highlighted how smaller landlords “make up the largest segment of the PRS” and “at a time when the UK is suffering from significant undersupply of homes, they must also be encouraged to keep momentum on their market offering.”

[7] Raised via pension fund capital for an open-ended BTR fund in addition to a £600 million joint venture with pension fund service PGGM.

[8] L&G have announced plans to grow its build-to-let asset base to single-unit family homes, moving away from a sole reliance on high-density housing.

[9] In response to Jeremy Corbyn’s pledge to cap rental charges during the Labour party’s conference in September 2017.