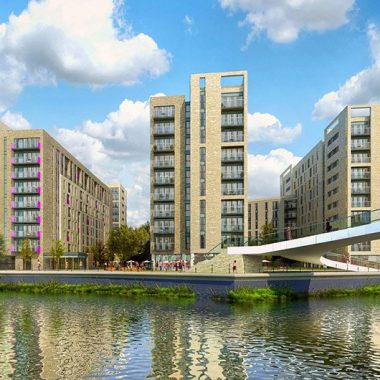 Despite the mixed feedback from early-February´s 2017 Housing White Paper, build to rent (BTR) developers were relatively jubilant on the back of government proposals to consult on the measures aimed at bolstering the sector, namely:

The Property Investor´s Blog had the opportunity to speak with Ian Fletcher, policy director and lobbyist at the British Property Federation (BPF) at this year´s residential conference on the release date of the report entitled “Build to Rent – Unlocking the Potential of an Emerging Property Sector” (see parts 1, 2 and 3 of the full event write up).  During the conversation, transcribed below, we discussed a range of issues including whether the consultation will create meaningful progress, competition with build to sell developers and what the growth of the sector potentially means for smaller landlords/ private portfolio holders.

PIB*: Can you give us some of your feedback from a build to rent (BTR) perspective of what was contained in the Housing White Paper?

IF*: The key thing that the industry has been asking for is the recognition of BTR in the planning policy system, and I think we get that in spades. With this segment of the industry incorporated into the National Planning Policy Framework (NPPF), local authorities will have an obligation to plan for this form of tenure within land allocations.  At the moment, while some local authorities are very supportive, many quite frankly don’t know what it is. It’s something new and they feel uncomfortable. Hopefully, this change of policy direction will give them greater understanding and confidence.

PIB: What kind of policy provisions are in the new White Paper specifically related to BTR that you feel would actually encourage the sector to move forward?

IF: When BTR developers are making a planning application, it is hoped that Local Planning Authorities and committees will be more attuned to the role of such projects within their boroughs.  For example, in November 2016 the London mayor issued Supplementary Planning Guidance (SPG) which has been really helpful in giving the local authorities in London some direction as to how they should treat these schemes.  As the policy moves nationally, this extra tenure can be appropriately tailored to the recognised needs of each local authority.  Indeed, BTR development may not be conducive to certain regions where there are noticeable shortages of for sale and/or social housing for example.  The White Paper also contains some direction as to how to treat BTR in respect to affordable housing policy in the form of Discounted Market Rent (DMR), now to be known as ‘Affordable Private Rent’, where there is a requirement to provide affordable housing in the same block as the private rented units.

PIB: And can you summarise the main contents of the BPF report on the Build to Rent sector that was put together in collaboration with Savills, London School of Economics (LSE) and Barclays?

IF: There are a broad range of asks within the report, not specifically just for today but also looking into the future for support which has indeed been forthcoming from government.  Of course, in addition to the institutional funding model, the sector will need to access debt (development) finance as well as longer term guarantees. Then there are our fiscal asks as the sector was slightly knocked off course in 2016 by virtue of the SDLT surcharge.

PIB: Is this fiscal cost something that is going to be appealed on an ongoing basis (either through minimisation, offsetting or even complete elimination)?

IF: Yes. Certain business models operating within BTR will largely be able to work around it, particularly if a scheme is forward funded.  However, if you are simply seeking to buy a stock off housebuilders then clearly you would still be subject to the three percent surcharge. While some businesses are prepared to go down the risk curve and take on planning and construction risks, there are other players who are more conservative. Pension funds, for example, would not want to do that and prefer to leave the development process to the experts, getting “hit” by the three percent surcharge themselves.

PIB: BTR developers such as Westrock and Miflats have been acquiring Permitted Development opportunities so pay the lower commercial SDLT rate…

IF: Yes, that’s one of the interesting factors in terms of where the sector is at. Much of the earlier acquired stock was commercial buildings with PD rights which were often forward funded and converted to BTR schemes.  Now, however, we´re seeing a large pipeline of bigger, purpose-built units coming through to the market.

PIB: Interesting, I guess quantity of available commercial buildings and land with permitted development rights is diminishing particularly in London?

IF: Yes, the growth of purpose-built BTR schemes was also spurred by the uncertainty over whether PDR was actually going to be renewed or not around the time of the 2015 general election.

PIB: With regards to the viability of BTR schemes, there has been an ongoing debate surrounding competition with build to sell schemes.  Purpose-built rental buildings are obviously still going to confront the same issues with regards to cost planning and build out.  There may actually be higher pre- and post-construction costs due to the need for extra durability (“wear and tear”) requirements and amenity provision.  Whilst a lot would depend on the kind of standard being brought on to the market and, as the sector matures, there are likely to be different strands of rental provision, but I was wondering what your thoughts were on this question of project viability?

IF: In terms of competition, the build to sell sector will also have difficulties in making schemes work in line with higher affordable housing requirements.  For build to rent, a lot of it comes down to scale.  The main developers are bringing in phased schemes of between 1,000 and 5,000 units as a means of overcoming this conundrum. As mentioned previously, another way of getting around the viability issue would be active the participation of the local authority in schemes, particularly via the provision of affordable rental units.

PIB: Yes, there are arms-length publicly owned development companies being formed across the country which could potentially work well in this scenario…

IF: Yes, providing that the policy is implemented correctly, local authorities will have an obligation to allocate land for BTR which will change the market dynamics as there is less competition with traditional housebuilders.  We’ve also seen an ebb and flow between London and the regions. In 2015, for example, a lot of the planning applications were predominantly in the Capital – a pattern that began to taper off in 2016 as land prices were clearly frothy and regions such as Manchester, Birmingham and Leeds began to demonstrate more interesting prospects.

PIB: In London, one of the ways developers are overcoming this issue is by panning out the future cashflows on higher rental figures. Fizzy Lewisham was reported to have rates 28% higher than local market rents and Vantage Point in Archway rents were 46% higher…

IF: Clearly in some circumstances, BTR providers are charging a premium versus other private rented sector property in their areas. That is a reflection I suppose of the different products in terms of the amenities they’re providing.  Most private landlords will not offer 24-hour concierge, for example. In that respect, it’s not excessive profit taking.  Once the sector is fully operational there will different business models catering to different segments of the market.  As with the housebuilding industry, you will have low end and high end providers.

PIB: On the issue of the role of private landlords, there has been much debate that smaller portfolio holders (particularly those with highly leveraged personally owned mortgages) are being driven out of the sector, principally by Section 24 of the Finance Act (No. 2) 2015 amongst other factors. Do you think there will always be a need for smaller landlords or such concerns are justified?

IF: There will always be a need for smaller landlords. They make up the largest segment of the PRS and, at a time when the UK is suffering from significant undersupply of homes, they must also be encouraged to keep momentum on their market offering. There is room for both smaller portfolio holders and our BTR members, and we anticipate that BTR’s growth in the sector will allow for a healthy level of competition to drive standards upwards particularly when we are trying to showcase the rental sector’s benefits and contribution towards solving a housing crisis at least 20 years in the making.

PIB: With the general consensus being that there is very little chance of build costs decreasing, combined with the well-recognised skills shortages within the construction industry, how do you think build to rent developers will look to overcome this challenge?

IF: Yes, cost inflation is a major issue across the industry – however, BTR is arguably at the forefront of innovation and there is a keenness to try and find quicker, more efficient ways of delivering that product in much the same way as the purposeful student accommodation market went towards modular and other modern methods of construction (MMC).

*IF – Ian Fletcher, Policy Director and Lobbyist at the British Property Federation (BPF)

The CGI used in this blog post is of Grainger plc´s Clippers Quay, build to rent, PRS development scheme in Salford Quays, which will deliver over 600 new private rented homes, along with commercial and amenity space.