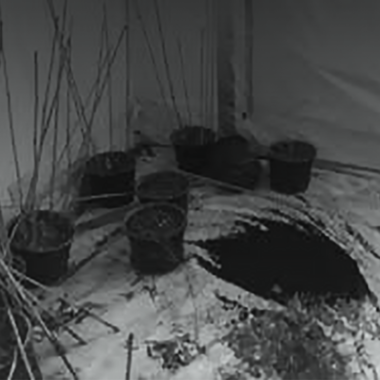 Illegal cannabis farms are dotted across the UK, with many situated in London. It’s reported that a cannabis farm is found every two days in the British capital, especially in South London. The borough of Croydon, in particular, had the most cannabis factories according to the latest numbers – 30 in total.

The London rubbish removal agency Junk Hunters has seen at least three cases of rental properties converted into illegal cannabis farms. They were called in on each occasion to clear out the leftover rubbish after police had raided the property and confiscated and destroyed all the cannabis.

Since the UK has not legalised cannabis, these factories continue to proliferate. Many have been found in derelict locations across Britain – from abandoned hospitals, and warehouses to farms and even buried shipping containers. But these locations aren’t the only ones where illegal cannabis farms are found. Many are popping up in rental properties across London.

Run-of-the-mill, seemingly unassuming houses or flats, rented to London tenants, are being converted into illegal cannabis farms. Landlords who aren’t directly involved with their properties’ tenants or who live off-site remain unaware of these farms, only to be bamboozled when they learn that illegal cannabis production was taking place on their property.

One such landlord experienced this in Northwest London. His rental house was discovered to be a cannabis farm – unbeknownst to him. By the time he called the rubbish clearance agency Junk Hunters, the house was in a total state of disrepair. Junk Hunters were able to clear the house as best they could, but significant repairs still need to be done on the house.

This landlord rented out his house to two tenants from Hong Kong. He used an estate agent, so he wasn’t directly involved with the tenants. For 6 months, there were no problems. He received rent payment on time and didn’t hear any complaints. Then, out of nowhere, the landlord received a call from the metropolitan police. His rental house had been raided, as the tenants were found to be growing cannabis. The landlord had no idea this was occurring on his property and by the time he found out, it was too late.

The rubbish removal company Junk Hunters were called in to clean up the house before the landlord started repairs. Over the course of 10 hours, with a 4-member crew and 5 full loads of rubbish, the previous cannabis farm was completely cleared out. The nearly deteriorated house contained all manner of rubbish – pots the plants were grown in, soil, hundreds of empty plant food cans, broken furniture, large extractor fans and motors in the loft, the plastic used to cover the windows and ventilation system, and various other items. Despite this large amount of rubbish, Junk Hunters were able to clear it out in one day. They left it completely clean – as clean as a former cannabis production house could be.

Junk Hunters knew that the landlord would still have to pay for extensive repairs to the house to make it liveable again, so they did as thorough of a job as they could manage. The landlord was very appreciative of their hard work, admitting that their meticulous cleaning was one positive aspect of this undesirable situation. With their house clearance service, this landlord will have a bit less work to do to restore his rental house.

Since this is the third cannabis house clearance the Junk Hunters have done, the company cautions landlords. Those renting out property can never be too careful and should vet their prospective tenants as much as possible. It’s not just commercial or industrial properties either, as this latest example shows. Even landlords with residential properties should beware.

Cannabis is illegal in the UK – possessing, selling, growing, and distributing can carry a 5-year prison sentence if caught. Production and supply can have up to 14-year sentences. Police forces are allowed to issue warnings or fines, however, if they catch someone with a small amount. Tenants setting up cannabis farms in their rented houses aren’t possessing small amounts, though.

If landlords are completely unaware of illegal cannabis factories in their properties, they likely won’t be implicated. They should be careful even so since Britain’s regulations on cannabis are severe. Not to mention that converted cannabis factories cause considerable property damage that could cost thousands of pounds to fix.

The landlord who worked with Junk Hunters was glad that they were able to clean out his house so efficiently. He would recommend the London rubbish removal company to any friends, family, and colleagues.