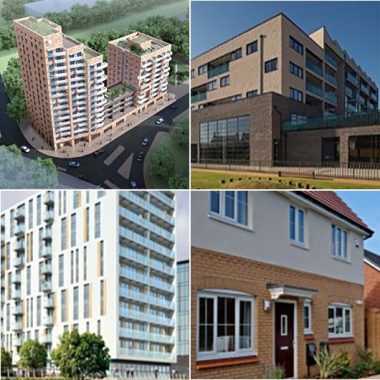 Amongst a series of industry talks and discussions at this year’s British Property Federation’s annual conference, the ongoing expansion of the UK institutional private rented sector was frequently discussed across the day’s agenda.

Following a headline presentation by Jaqui Daly director of investment research and strategy at Savills, one of the panel discussions saw Marie Hunt, executive director and head of research at CBRE; David Montague, chief executive at L&Q; Andrew Bruce at the Scottish Futures Trust and Martijn Vos, senior real estate portfolio manager at APG AM explore the contemporary build to rent (BTR) investment case, the sector’s expansion and some of the pertinent concerns.

The Exponential Growth of Build-to-Rent

Multiplying fivefold since 2013, contrary to what some believed was a market “fad”, the growth of purpose-built rental schemes is showing little sign of slowdown.  According to Jacqui Daly, there are now 19,000 completed build to rent units in the UK with a pipeline of 27,500 under construction and 58,500 in the planning process.  The tables below show the largest owners of completed build to rent stock and of the pipeline of new rental stock coming to market: 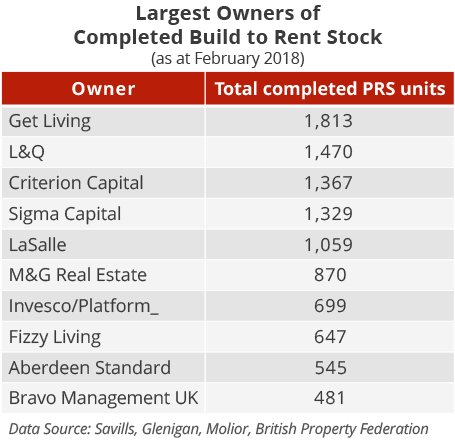 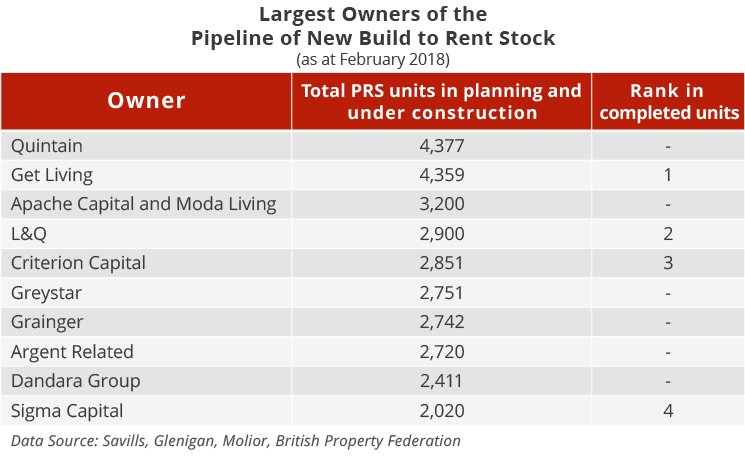 Project highlights over the course of 2017 include:

Daly also highlighted that average scheme densities are on the rise in response to evidence of latent demand and a strong appetite amongst foreign investors.  Some 45% of build to rent stock completed or under construction is backed by overseas finance.  On this topic, Martijn Vos of APG AM commented that, while the BTR industry self-regulates to a certain degree, the comparatively low level of “top down” control in the UK continues to incentivise investors from across the globe.

This raised the question of whether institutional PRS will eventually become regulated.  Vos commented on how the implementation of rent-caps in Germany’s prominent cities actually ended up creating more averseness towards the sector and subsequently reduced supply.  However, other panellists argued that if rental cap ratchets were aligned with relatively predictable inflation-based increments (meaning investors would be able to sustainably match their liabilities), there should not be too much disruption.  In Scotland, a more measured approach of identifying and capping rents in overheated “pressure zones” has proven successful.  On a similar note, it was argued that the 2017 Housing White Paper’s stipulation of minimum 3-year tenancies should actually be welcomed provided that its roll-out is supported by a “legal backdrop that encourages economic sustainability”.

The panel discussion also underlined the importance of building various forms of rental homes that accompany different stages of life.  The family rental scheme model is well-established in the US where competition is noticeably more intensified.

As the the second highest deliverer of completed BTR units, David Montague from L&Q confirmed that 25% of its 100,000-unit pipeline will be bought to market at affordable rents, and 24% at market rents.  With projects funded by the bond market, the developer can take a long-term (30 year) view and operate counter-cyclically.  Build to rent, Montague asserted, will therefore form an important part of L&Q’s strategy and is fully supported by the Regulator of Social Housing (a statutory committee of the Homes and Communities Agency monitors internal governance and financial decision making).

Build to Rent in the Republic of Ireland and Scotland

Marie Hunt spoke of Ireland’s “embryonic” build to rent sector, with strong expectations that the size and profile of the population will fuel a strong demand for this tenure to grow in the coming years. Purpose-built PRS units in Dublin, she highlighted, will appeal to many of Google, Facebook and other tech company employees under short-term contracts. However, ongoing supply issues remain across the major cities dating back to the economic downturn.  Combined with a low level of government support for build-to-rent, serious questions remain around affordability and high VAT rates affecting project viability across the board. More needs to be done to spur confidence in this asset class, she argued.

Andrew Bruce from the Scottish Futures Trust (SFT) commented that build to rent has also gone off to a slow start.  However, he believes that the sector’s growth will be integral to the Scottish government’s affordable housing drive moving forward.  The SFT have been collaborating more with local authorities and absorbing the downside risks of early rental voids (prior to the developments achieving full occupancy).

Ongoing Concerns in the Build to Rent Sector

The Q&A’s approached a range of topics, including the importance of deploying modern methods of construction and pre-fabrication into the build to rent model to scale up delivery.  Also discussed was the question of achieving the correct balance between delivering smaller “micro” units to the rental market place without compromising on overall standards and comfortability.

From a planning perspective, the panel agreed that it is still difficult to get build-to-rent projects “over the line” and more needs to be done to educate council decision makers.  Many associate larger private rented sector schemes with either amateur landlords or, at the other extreme, the provision of high-end “loft” style accommodation – often deemed inappropriate for local needs.