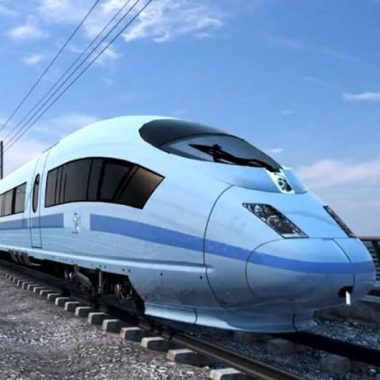 After almost 8 years of debate and consultation, the initial phase of the second high-speed rail network hybrid bill is expected to receive Royal Assent early this year. Running 335 miles from Euston (London), High-Speed 2 will be formed in a “Y” configuration with construction of Phase 1 aimed for completion in Birmingham by 2026 (the middle of the “Y”).  Phase two will connect Birmingham with Leeds (at the top right of the “Y”) and Manchester (at the top left of the “Y”), with the entire line scheduled for conclusion by 2033.  With trains running at 225 mph (362 km/hr), journey times between Manchester and London are expected to reduce by 30 minutes, simultaneously boosting connectivity with the Heathrow Express and Crossrail lines.  Both Leeds to Birmingham and Manchester to Birmingham journey times will halve and Toton, Derbyshire (the East Midlands hub) to Birmingham will take 19 minutes (for more detailed information on the route, see this interactive map).

At an estimated cost of £55.7 billion, HS2 has become one of the most divisive infrastructure projects in recent history – with both sides presenting compelling arguments. The project´s ambitions are noteworthy, notwithstanding dubious claims that two thirds of the Northern English population will be able to travel to central London within 2 hours and predictions that British GDP will rise by 0.8% within 5 years of the line opening.  Its predecessor (HS1, the Channel Tunnel Rail Link) is widely deemed a success – enabling more people to travel to the continent than ever before.  Proponents state that, with rail passenger levels rising by 3% annually, HS2 comes in line with a shift in behavioural patterns as more people choose public and autonomous travel.  The result, they affirm, is that the use of cars and short distance air-travel will decrease, lowering the national carbon footprint and pollution levels. Network Rail has also pointed out that, with four of the most over-crowded services operating between London and the Midlands, HS2 will lift some of the strain.

Bridging the “north-south divide” has also been a well-publicised plus point.  It is claimed that HS2 will have a crucial role in rebalancing the economy and complementing the wider roles of devolved mayoral powers across the Northern Powerhouse and Midlands Engine.  With London showing signs of achieving “mega city” status as early as 2026, much of the expansionary pressure can be gradually diverted to these growing hubs coordinated under one national masterplan.  In turn, international companies can open up new markets and take advantage of less expensive employment whilst still ensuring good connectivity to the Capital.  Other positives include the creation of 22,000 construction jobs (70% being outside of London) and healthy levels of revenue generation once the lines are in service.

The objections – by organisations such as the HS2 Action Alliance (HS2AA), Heathrow Hub campaigners, local authorities and a broad spectrum of MPs – continue to attract media attention.  Perhaps the most prominent is the lack of certainty over costs to the taxpayer and whether the proposed merits of the project are justified (and necessary), particularly given the scale of the UK´s current account deficit and funding issues within other public services.  Fears that the project could become an expensive white elephant have been counteracted by assertions that Britain should not fall behind other parts of the world and that the cost will be spread out over 15-20 years, and is therefore affordable.  However, June 2013 projected expenditure was revised from £33bn to £43bn, further pushed up to £55 billion by the November 2015 Autumn Statement.  So-called “Treasury insiders”, as cited by the Sunday Times, have quoted a £73 billion price tag, affirming the Public Accounts Select Committee´s alarms over spiralling costs. 262 miles shorter than HS2, it is also worth noting that HS1 was completed 16 years after its announcement.

Many are wondering if HS2 will genuinely resolve connectivity issues across England and whether the project will become “London-centric” – with areas like Birmingham effectively becoming part of the South East labour market.  HS2 may only advantage a small section of the population who use trains between major cities and thereby disproportionately direct economic benefits to “hubs of wealth”, segregating small and mid-sized towns that will still have to endure long connecting times.  For these reasons calls have been made to build the line from the north downwards, at the same time as construction work starts in London.  It is argued that the socio-economic added value from HS2 will therefore be more evenly distributed across the country.

Over 600 properties will be bulldozed and another 340 will be “cut off” from their wider neighbourhood (homeowners will receive the “unblighted” market value of their property, plus 10% and moving costs).  A range of practical issues will emerge during the development of the Euston (north London) end of the line, particularly the interference around the surrounding areas of Camden.  With the Compulsory Purchase Order (CPO) process rarely being simple, building the long tunnels out of London is estimated to be a seven to eight-year process and in Manchester some 130,000 families will be affected.

There will be a vital need to mitigate noise and visual impact whilst adhering to precise specifications, not to mention a clear plan to meet a range of detailed health and safety questions (10 workers died during the construction of HS1).  Cutting through the British countryside will also involve archaeological investigations on a wide scale, further expected to hold up progress.  With infrastructure to be built on 250 acres of green belt land, the ecological concerns being raised by county wildlife trusts and bitter opposition by local people on the route are important, considering that over 150 nature sites could be impacted (including 10 Sites of Special Scientific Interest and 50 ancient woodlands).  The line is expected to run through old cemeteries in London and Birmingham, affecting some 50,000 bodies (the Ministry of Justice has to grant a licence for their removal, gaining planning permission and adhere to rules established by organisations such as the English Heritage and the Church).

Conclusions and Effects on the Property Industry

At the time of writing it is far too early to predict a guaranteed success of a project like the HS2, yet it would be unfair to label the project as “politically driven” and “grandiose”.  The economic benefits of major infrastructure projects – whilst often overstated – are often hard to deny from a long term perspective and HS2 does present a strong case for inter-city connectivity and regional employment generation opportunities.  Ancillary projects such as the Community and Environment Fund (CEF) and the Business and Local Economy Fund (BLEF) are also encouraging and will hopefully complement ongoing investments such as the £2 billion road and rail infrastructure capital injection, announced in the recent Autumn Statement.

However, questions about the damage to the taxpayer´s purse, how disruption will be controlled during the construction process and the lack of clarity over future fares must be clarified. How Councils, already suffering from budget cuts, will be able to harness the ongoing development of HS2 into their Local Plans is also in doubt and, of course, the economic and political repercussions of the Brexit negotiations could also stifle progress.

It would be reasonable to expect the continued growth of foreign and institutional investment in commercial, for sale and build to rent property developments in larger conurbations such as Birmingham, Manchester and Leeds is likely to continue – quite possibly at an accelerated rate as progress of the lines becomes more perceptible.   It will be worth paying attention to markets around the main train stops (including the Old Oak station in North West London) with solid medium-long term capital appreciation prospects, as well as within the secondary markets located within reasonable commuting distance.  Areas that PS Investor Services will be monitoring with interest include Toton, Chesterfield and Crewe (where prices are relatively low and yields are therefore high).  It would seem that calls for an East-West railway line, faster connections to Scotland and Wales and much more pressing priorities such as small scale road projects have been stalled on the basis of HS2´s success – however, regions surrounding such projects could warrant further investigation in due course.