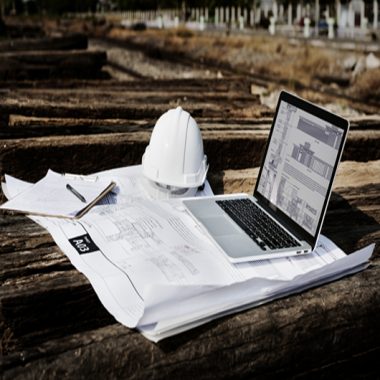 This and the following post aim to provide a broad synopsis of a Planning Resource event held towards the end of 2016.  I have split the content into two parts, the first covering the morning´s discussion on the wider implications of the Brexit decision on the UK economy, as a precursor to the afternoon´s conversations on planning for housing.

Published at the start of January 2017, perhaps facetiously, it´s worth caveating that there is a certain risk that much of the following write-up could well be obsolete at the time of reading given the political ambiguity and lack of specifics regarding the UK´s exit from European Union.  Such uncertainty is likely to remain, at the very least, until the triggering of Article 50 of the Lisbon Treaty and formal talks start in March 2017.  Nonetheless, the discussions during the course of the day certainly provided some thought-provoking insights.

Paul Hackett, Director at The Smith Institute, chairing the morning´s discussions, reminded us that public debt has almost doubled since 2010 (the UK has the largest current account deficit of the G4 currencies).  Significant risks remain and the lack of economic contingency planning during the course of the Brexit debate is leaving an air of unpredictability, different to the pre-Global Financial Crisis environment.

Dr Adam Marshall, Director General at the British Chambers of Commerce, the first speaker of the day, adopted a “keep calm and carry on” tone whilst affirming his organisation´s role of “linking the Brexit agenda to the local growth agenda”.  According to Dr Marshall, encouragingly, businesses are still confident about their own growth prospects, despite a prevailing negativity about the UK economy as a whole.  Citing the increasingly common adage that “disruption creates opportunity”, he outlined six main “Brexit-proofing” strategies being adopted by the Chamber:

While the hope is that local growth will eventually aggregate on a national level, concerns do remain amongst businesses that rely on the EU manpower and on the issue of import / export trade orientation.  Other issues raised included the onerous nature of “up front” business costs that choke cash flows – namely Business Rates, National Insurance and pensions contributions.

Dr Marshall´s talk was followed by a panel discussion involving James Sproule, Chief Economist and Director of Policy at the Institute of Directors; Mark Littlewood, Director General at the Institute of Economic Affairs and Nigel Wilcock, Executive Director at the Institute of Economic Development.  Although the true repercussions are yet to unfold and there is a limited timeframe to produce a decent trade deal, an argument was made that worst case scenarios regarding the Brexit decision have been unduly pessimistic.  Using the analogy of a mosaic to describe the negotiation process it was claimed that, once the picture is “60-70% pieced together”, uncertainty will not be an existential factor in the UK.  We were reminded that Britain is well-embedded in the European supply chain and has deep connections with France and Germany that cannot simply halt.

Nonetheless, a successful Brexit outcome will be based on how quickly unfettered trade relationships can be established, principally with the EU-27 and the US.  Key issues such as tariffs and border control, if not resolved in the right way, could well mean that countries like Germany surge ahead in terms of inward investment.  European businesses that export significant amounts to the UK, from paper to large energy and transport projects, will have to adapt to new supply-chain dynamics as a result of the devaluation of Sterling.  Concerns were also raised about the 0.25% base rate drop instigated as a result of the macro-led turbulence following the referendum decision, and the potential impact of creating an environment where “cheap capital” ends up being allocated speculatively.

It was also argued that the ongoing devolution agenda may mitigate some of economic impacts of Brexit.  Under long-term aspirations of learning from best-practice and moving towards decentralised models imported from Germany and the US, the over-arching objective is to move away from too many Whitehall spending decisions (estimated at between 90-95%).  Questions do remain as to how the devolution process will effectively be able to move beyond experimentation and whether decisions will be made non-politically.

The next presentation by Paul Swinney from the Centre for Cities echoed Richard Holt´s findings that regions that predominantly chose to leave the EU are likely to witness continued sluggish economic growth, possibly moving into negative territory. Using the example of the North East, Swinney elaborated that 100 years ago, one of the main benefits to business locating in these regions was lower costs and to take advantage of rivers and ports for transport, fuel sources, large numbers of workers, amongst other factors. Today, the ability to share ideas and information more universally as well as the spread of the “geography of knowledge” have collectively resulted in a distinct southern bias.

Prior to an informal roundtable session, Tim Thomas, Director of Employment and Skills Policy at the Engineering Employer´s Federation made the final presentation of the morning entitled “What will Brexit mean for the UK labour market and businesses?”  A lawyer by trade, Tim has maintained a presence in Brussels, working closely with the employer´s sectoral organisation and within a range of governmental departments.  Outlining the intricacies of The Council of Europe, the European Free Trade Association, European Economic / Schengen Areas, European Union, Eurozone and the EU Customs Union, Thomas was blunt in his affirmation that cutting a trade deal in 18-24 months is not going happen. The Single Market enables free movement from one EU member state to the other of goods, people, services and capital (the “four freedoms”) with no tariffs or taxes between countries; Britain´s probable request to have access bar freedom of movement will almost certainly be rejected.  The UK will now have to negotiate trade deals and pay tariffs which will require a comprehensive negotiation process that will comply with detailed customs checks and abide by EU rules including employment and regulation.

An “access” based model is being debated whereby Britain can become part of the EFTA / EEA.  This would mean that, in return for EU budget contributions (without a say/vote), there will be single market access with no tariffs; citizens can live/work in other EU member states and all EU single market legislation will be transposed.  We can also expect other extended debates on falling back to WTO rules to trade with the EU (should there be little possibility of negotiating desirable free trade deals) and if/how the UK will be able to maintain ties to the Customs Union.

Continuing to present a range of data, Thomas pointed to how it is often forgotten that after the recession, EU immigration overtook non-EU immigration and there is a strong argument that much of Britain´s resilience through the downturn was demonstrably attributed to foreign employment. He also noted that moving towards stricter immigration policy will effect taxation, social security and regulation and, should the UK adopt the same approach applied to non-EU nationals with EU workers, 75% would fail visa requirements.  With business leaders from the manufacturing industry reporting of skilled EU workers already leaving, Thomas also argued that the Australian points-based system is not robust enough and, with the recognised challenges of implementing employment driven work permits, there is a body of opinion that the informal labour market may increase.

To add further confusion on the vote outcome, Thomas used Labour Force Survey (LFS) data to demonstrate that just 1% of the EU migrant population lives in the North East compared to 43% in London and the South East (66.6% of Burnley voters chose to leave the EU as did 60.1% of Rochdale voters). 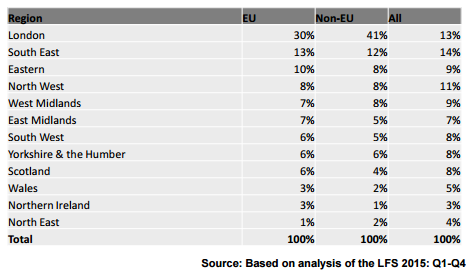 Before moving on to the next section, it is worth quoting recent comments made to the Estates Gazette by James Bryce of Arcadis on the issue of workforce planning that “the British construction sector has been built on overseas labour for generations and restrictions of any sort – be it hard or soft Brexit – will hit the industry.”  Arcadis estimates that the level of attrition could be anything between 135,000 and 214,000 over five years as construction companies find it challenging to source EU workers particularly from Poland, Romania, Lithuania, Bulgaria, Latvia and Hungary – echoed in the Farmers Review as a “ticking timebomb” that could exacerbate what is already a major skills shortage.